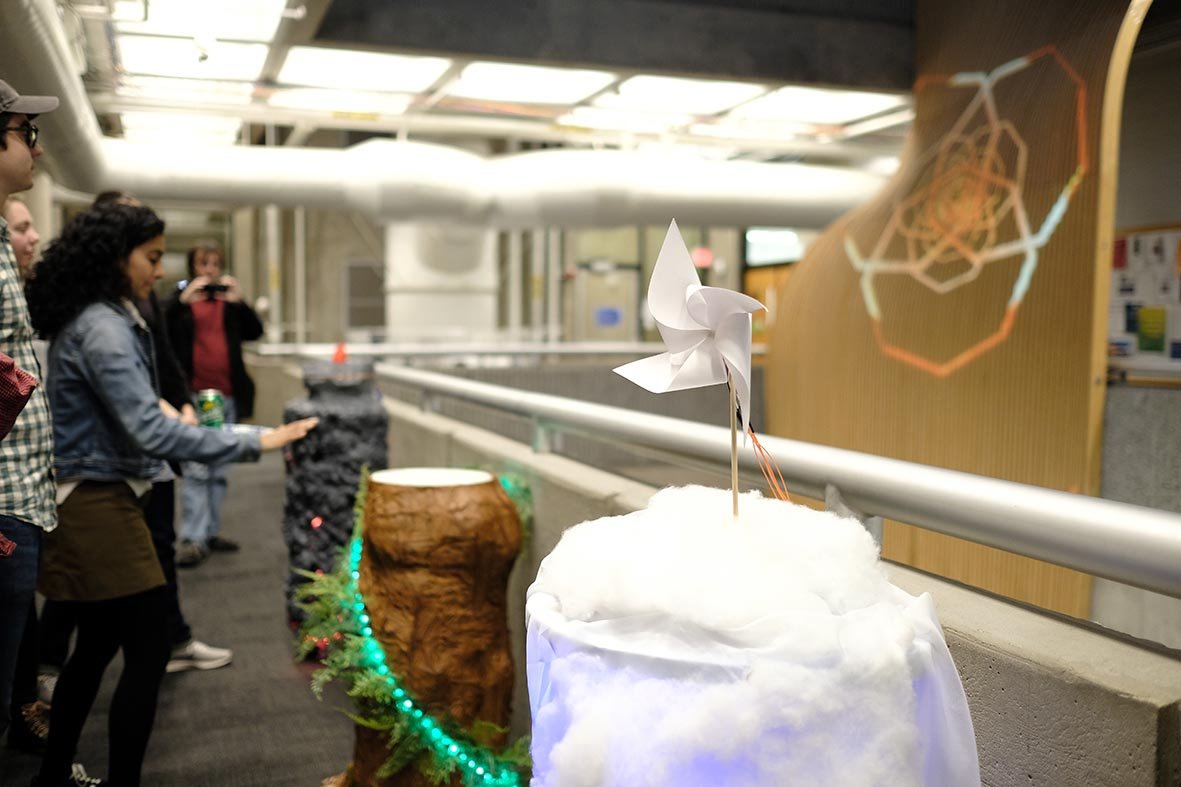 Users interact with the "Air", "Earth" and "Fire" podiums influencing the generative geometry projected on the waterfall bench. This project encourages collaboration towards a shared goal to update the canvas.

Co-location is a given in the dense hives of research and learning that Georgia Tech’s academic buildings are. Collaboration and community aren’t automatic despite this co-location though. Relationships rarely materialize from frequent passings in the material world, and so often the reason everyone has been put together is to encourage cross learning and communal growth. Instead offices and floors become silos in the name of efficiency, but perhaps to detriment of community and serendipity,

In anticipation of a final demonstration or installation at Launchpad, we’re focusing on this opportunity to build a sense of shared ownership and purpose within an already shared space of colleagues in the context of the Design Building (Architecture West). Nonetheless, the concept’s purpose and framework can be adapted to any work space shared by colleagues who don’t normally get the chance to interacts across departments, seniority, labs, teams, or even just seating arrangements on the floors.

We propose that a centrally visible area like the atrium could be the catalyst for community connectedness. 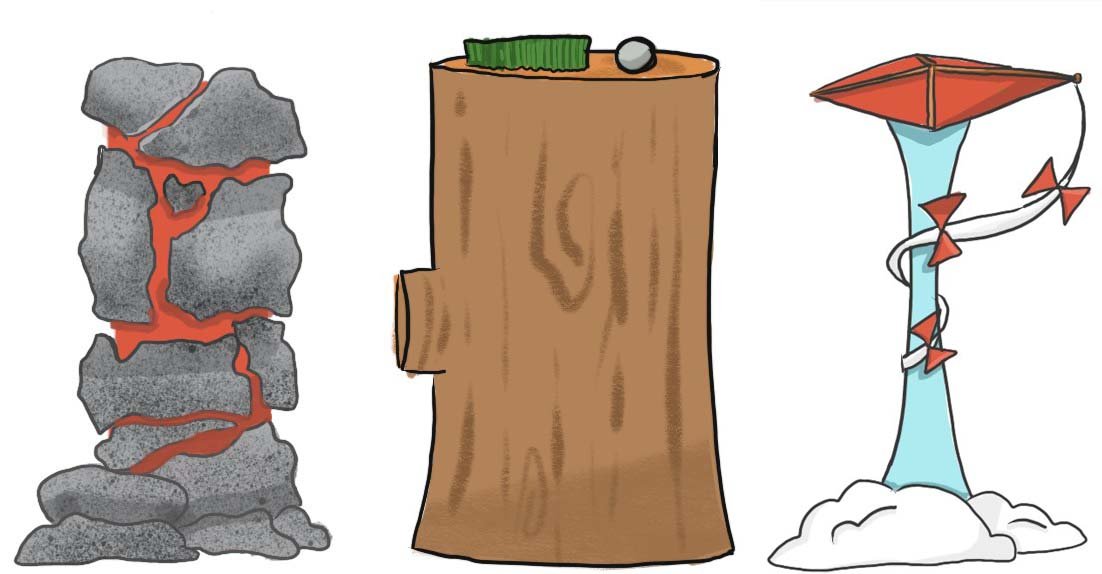 This concept consists of a series of individuals booths each with its own tactile interactive element. The individual pedestals push a unique output to the waterfall sculpture canvas. The output on the canvas will reflect a synergistic representation of the inputs received from the booths, as opposed to simply an additive or destructive representation on the shared central canvas. Employing the idea of inputting energy to see a reaction.

While each interaction will be contained to a pedestal in order to create a unified experience, the initial idea is to theme the booths together under one umbrella. The structure in the design building looking like water flowing, so it will be the core water element. While the pedestals will represent the other elements combining (air, earth, and fire).

Each pedestal will have a themed unique interaction that ultimately contributes to the larger canvas. The canvas will have generative audio and graphics via projection method. 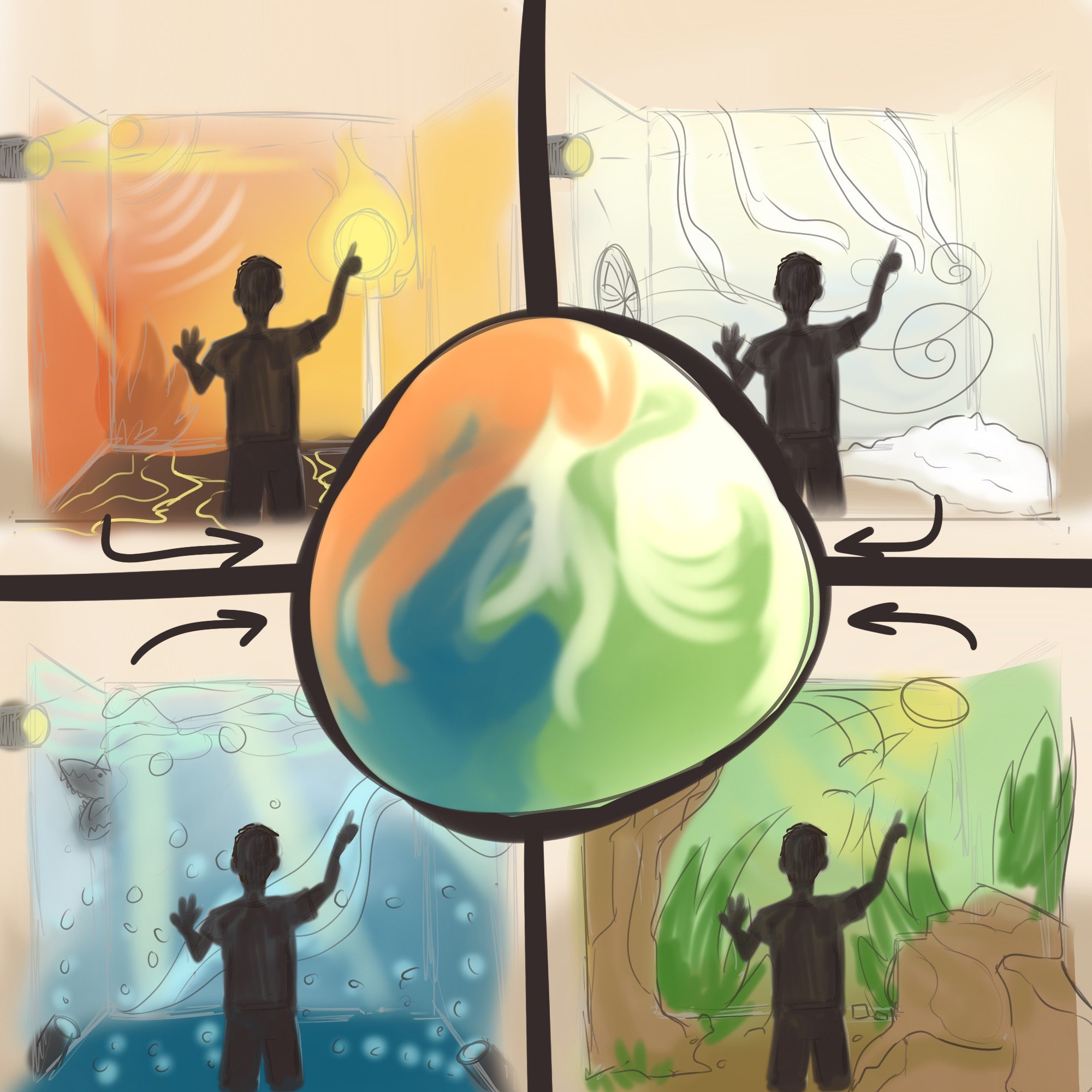 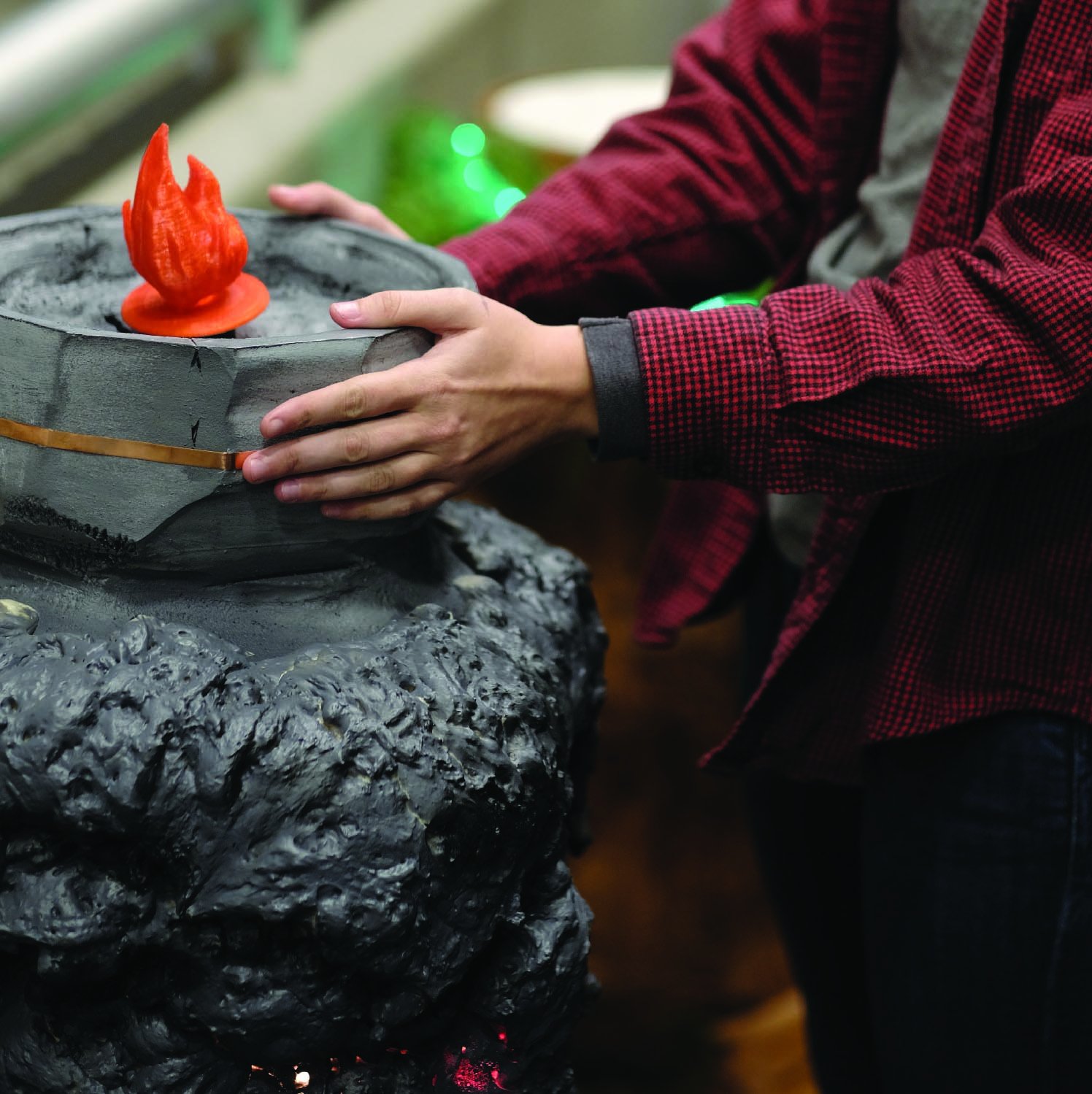 When a visitor cups their hands around the goblet, the fire podium will light up, a crackling sound is heard and the projection reddens to reflect the fire. 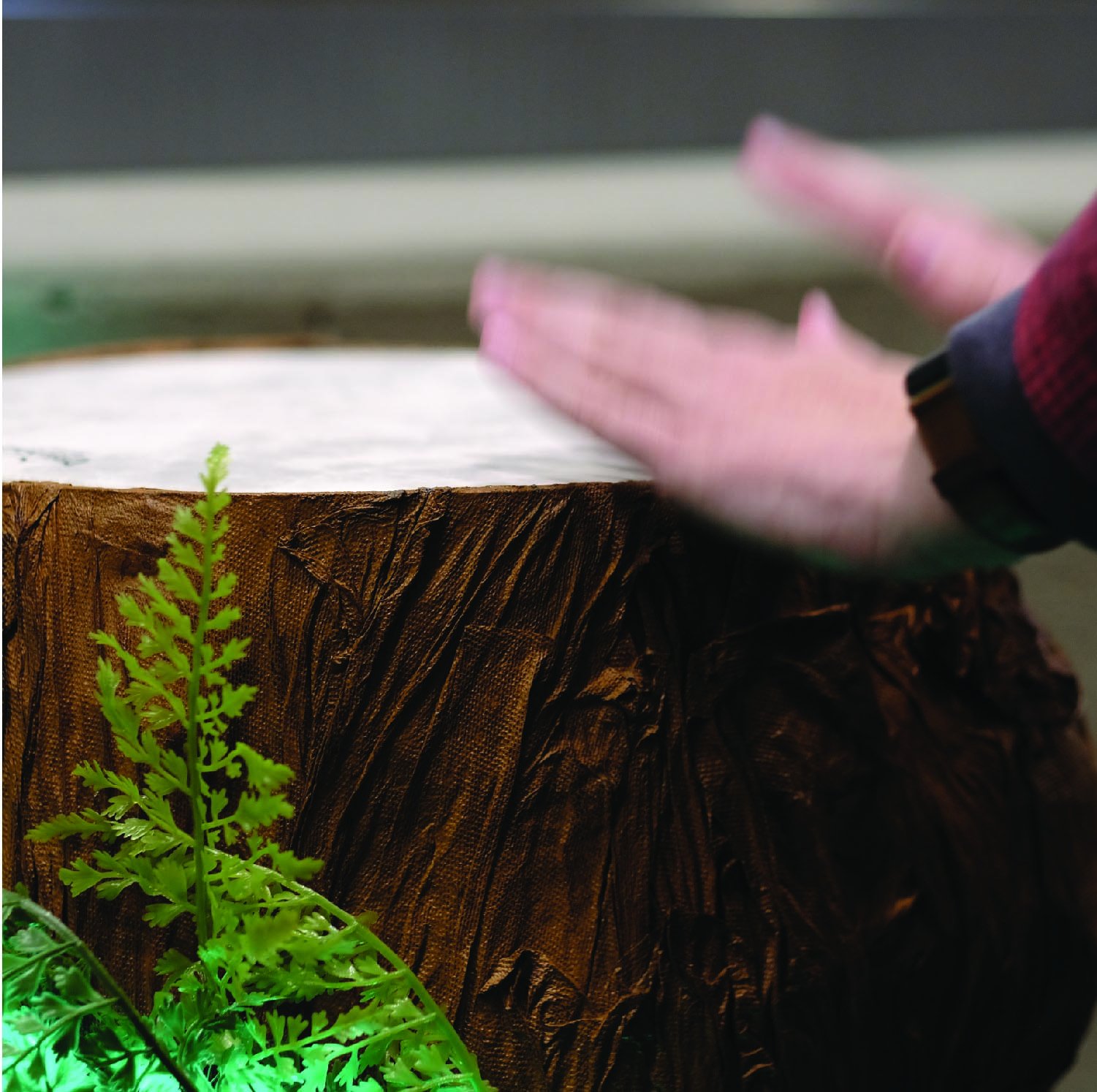 Users step up onto this podium and drum a beat. The projected geometry responds to each beat of the drum. 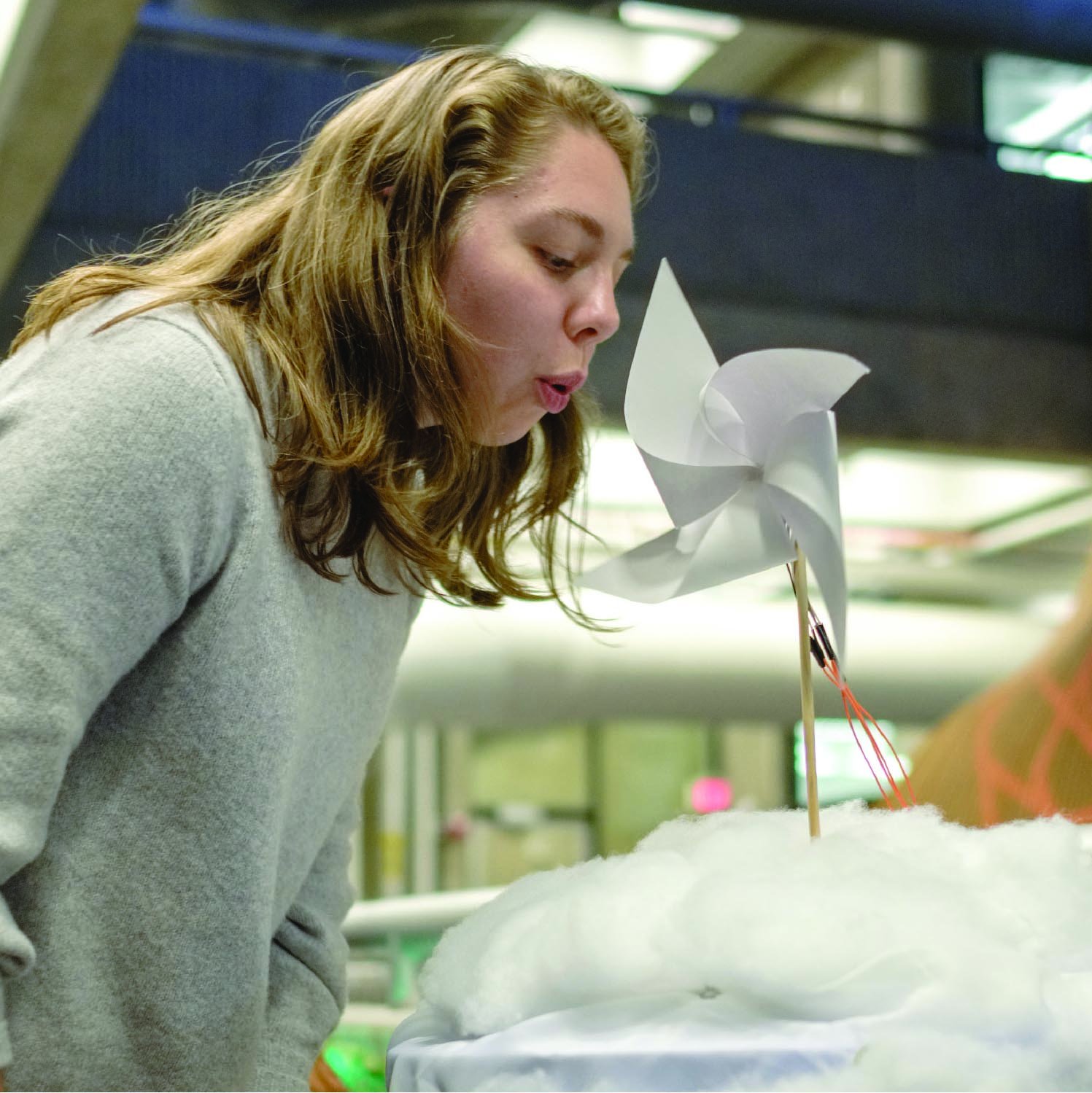 In order to activate the air podium, users blow on a pinwheel. The sound of wind whistling is heard, while the projected geometry intensifies. 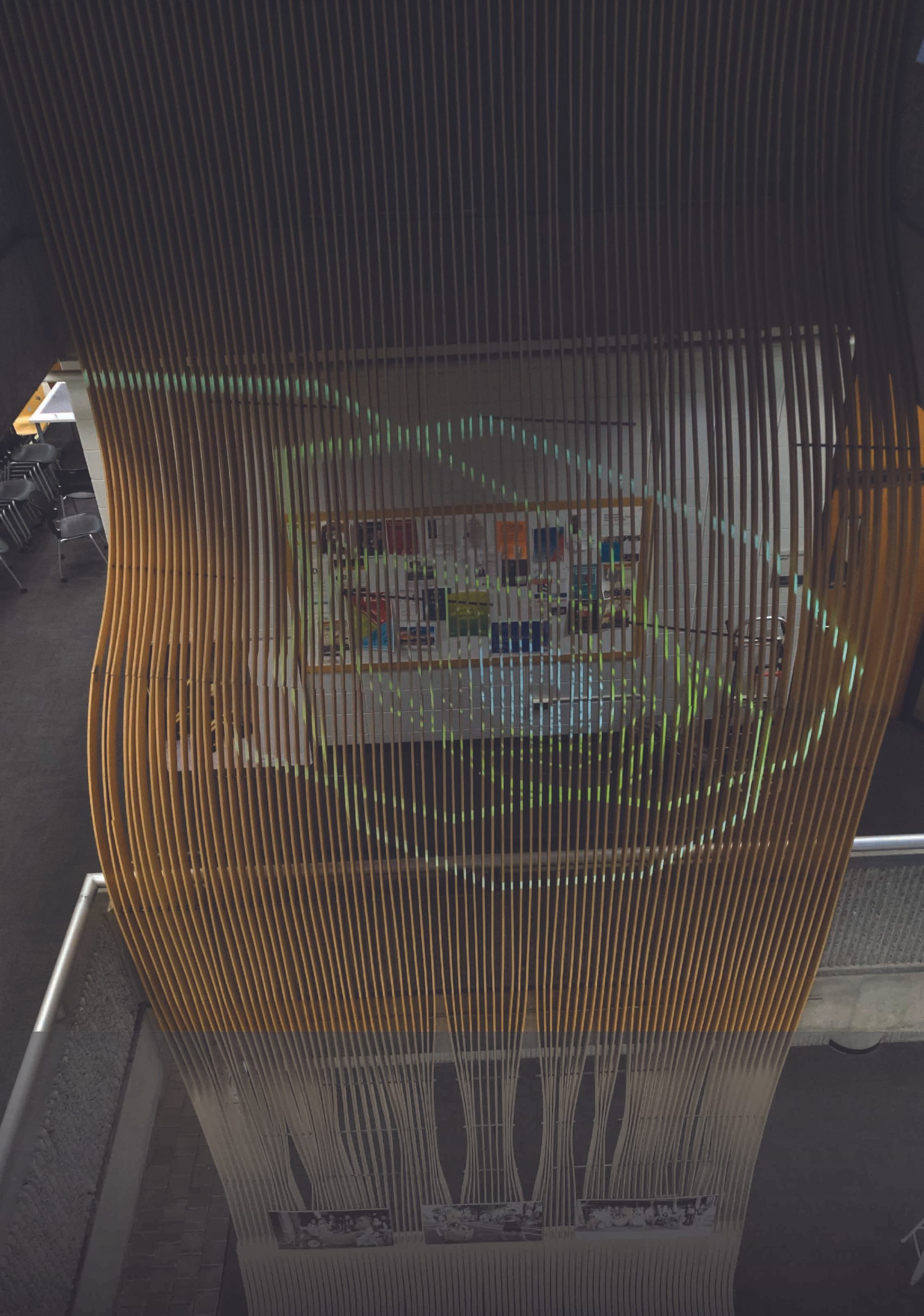 The interactive canvas is projected onto the waterfall bench, providing visual access to visitors across the three floors of the College of Design East Building.

The following video is a sample of projection material, made by activating all 3 podiums at the same time.

This video shows another version of the projection material, made again by activating all 3 podiums.