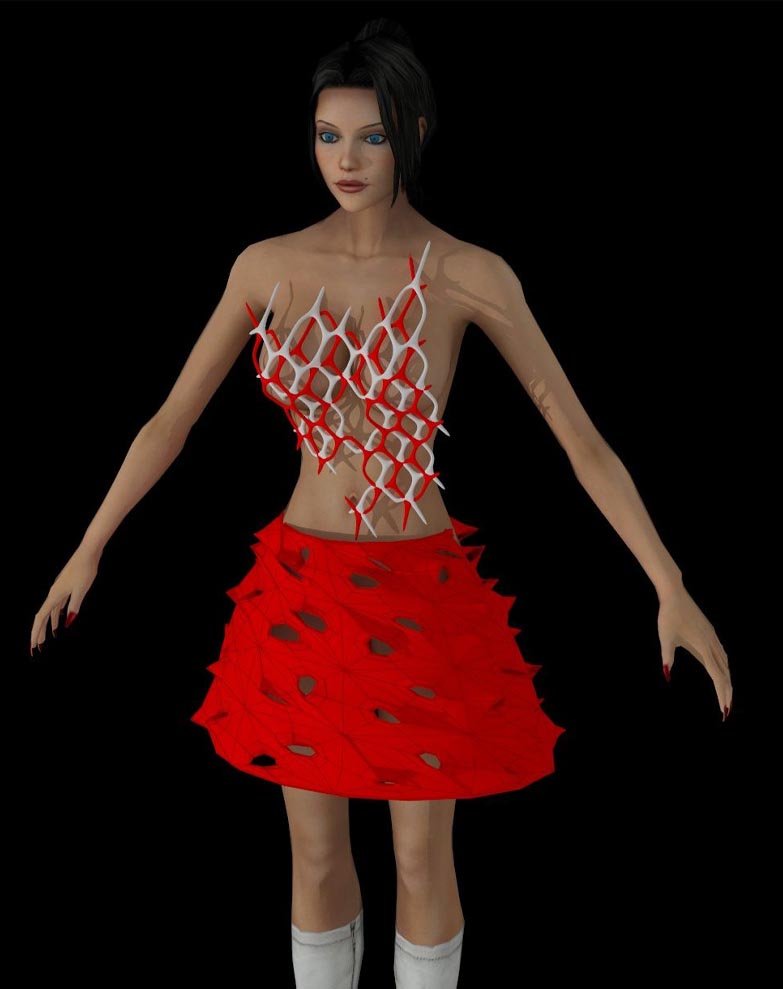 These days, consumers can make their choice from a wide variety of clothes provided in the market; however, some prefer to have their clothes custom-made. Since most of these consumers are not professional designers, they contact a designer to help them with the process. This approach, however, is not efficient in terms of time and cost and it does not reflect the consumer’s personal taste as much as desired. This study proposes a design system using Interactive Genetic Algorithm (IGA) to overcome these problems.

IGA differs from traditional Genetic Algorithm (GA) by leaving the fitness function to the personal preference of the user. The proposed system uses user’s taste as a fitness value to create a large number of design options, and it is based on an encoding scheme describing a dress as a two-part piece of clothing. The system is designed in the Rhinoceros 3D software, using python, which provides good speed and interface options.

An individual refers to a 2 piece dress consisting of Upper and Lower parts with spe-cific parameters. An individual is a dictionary of the form {‘upper’:X, ‘lower’:Y, ‘up-perParms’: L1, ‘lowerParms’:L2} where

A GUD (General Upper Design) is an integer in {1..10}. Each GUD refers to one of the 10 different definitions, designed with grasshopper for an upper body design piece. As an example, figure below displays the representation of GUD number 9 in the rhinoceros interface. To be able to show this GUD, 3 initial values have been set for its list of parameters. 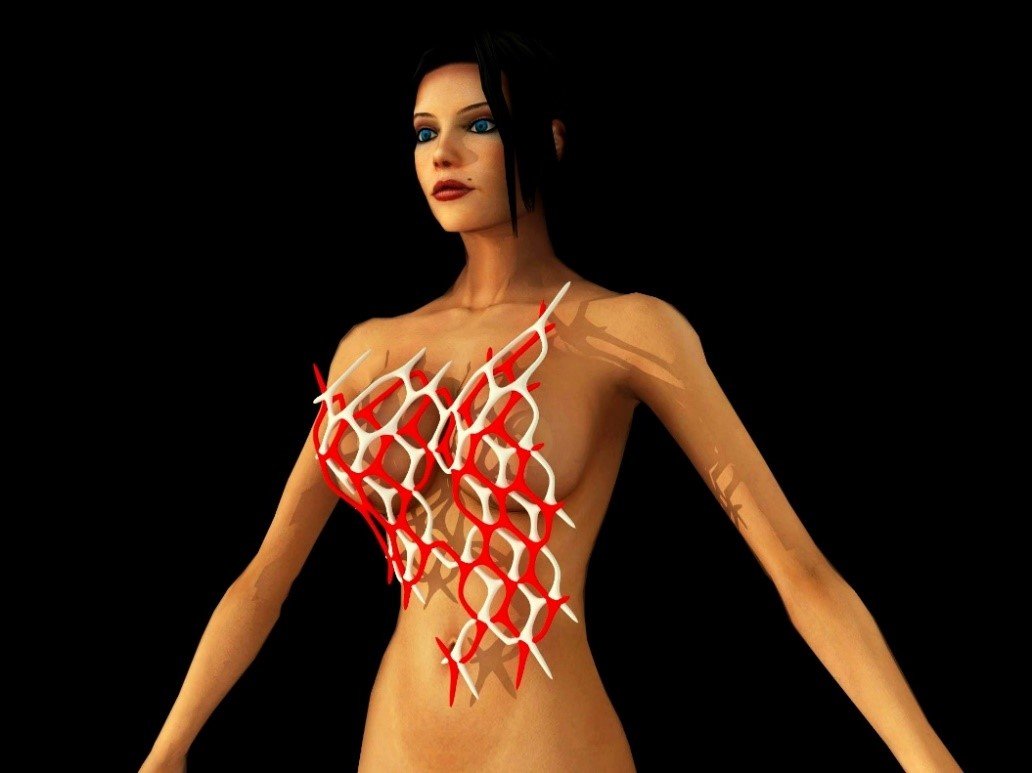 A GLD (General Lower Design) is an integer in {1..10}. Each GLD refers to one of the 10 different algorithms, designed with grasshopper for a lower body design piece. As an example, figure below displays the representation of GLD number 7 in the rhinoceros interface. To be able to show this GUD, 3 initial values have been set for its list of parameters. 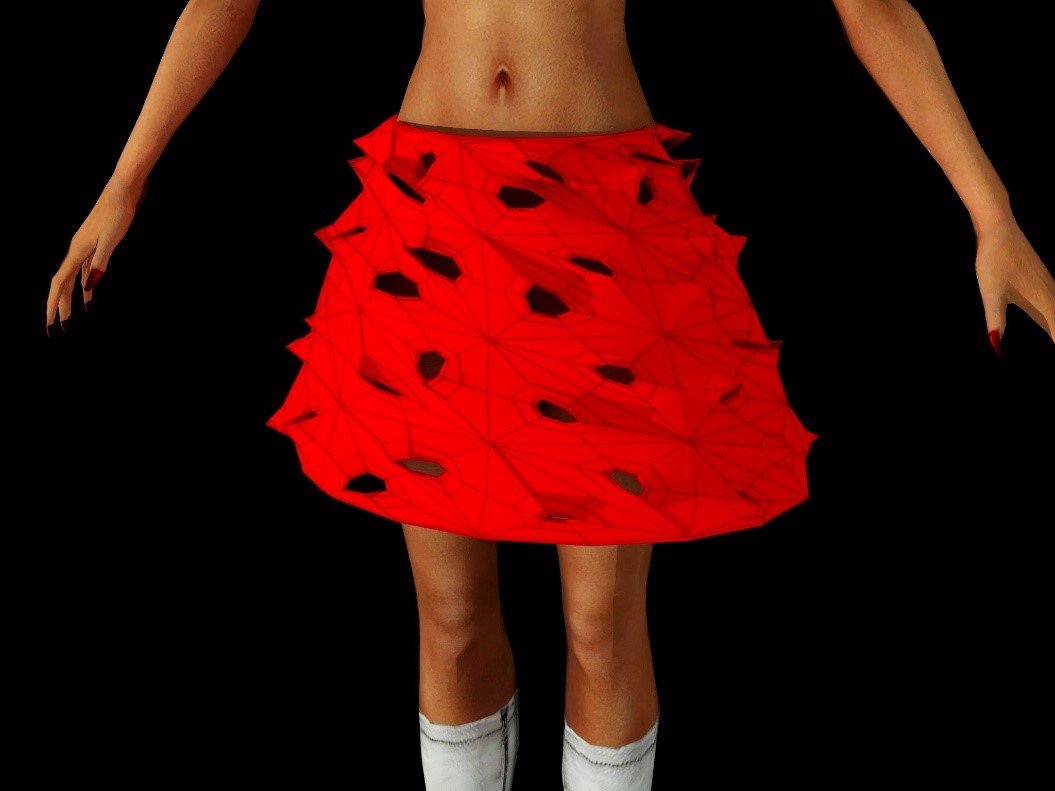 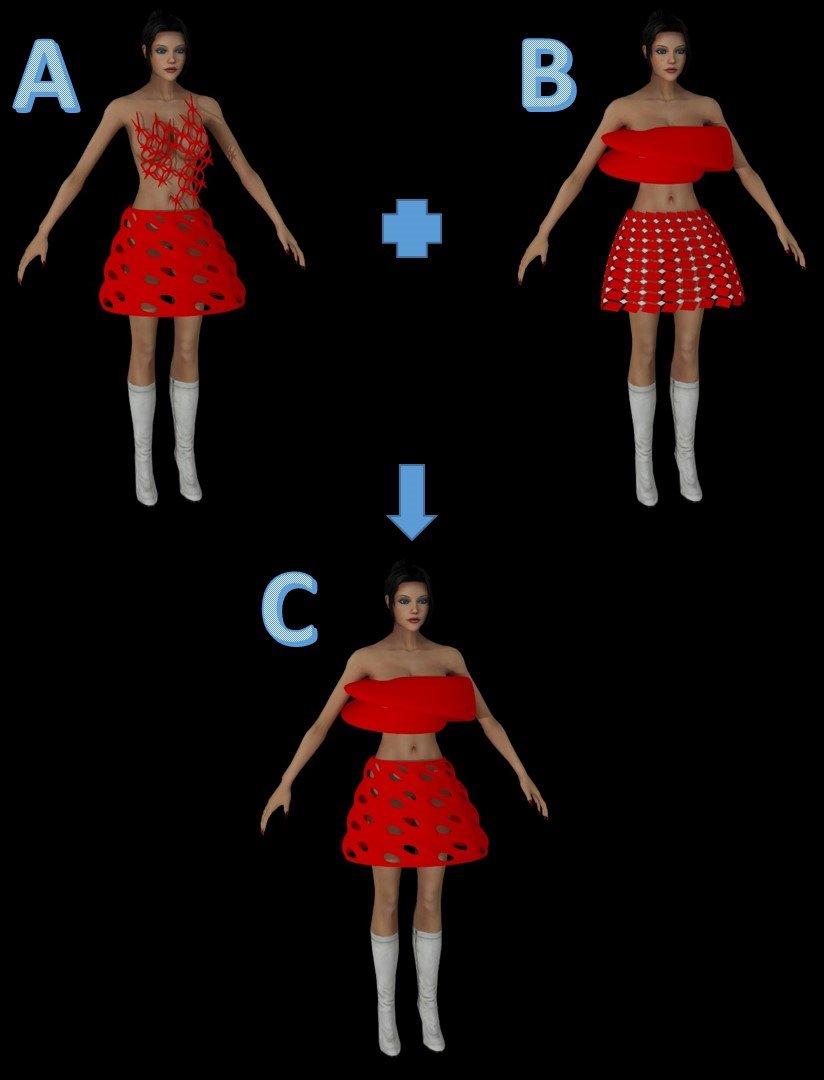 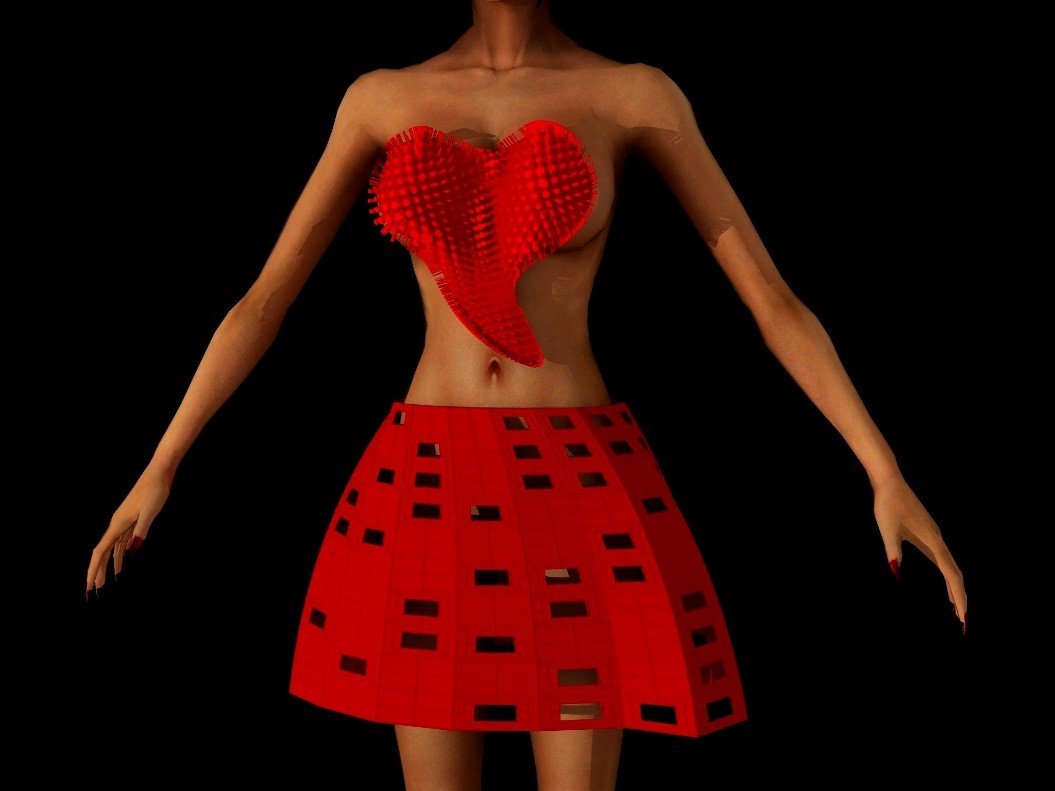 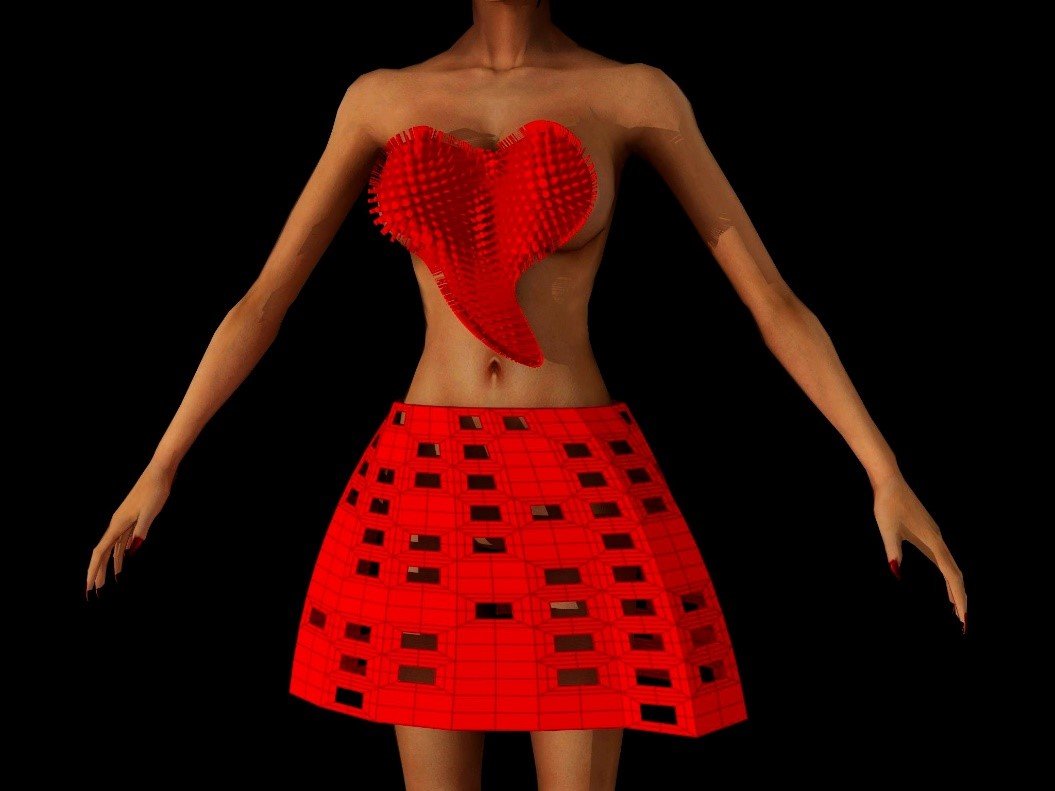 The overview of the entire system is shown on the right. To create the initial population, the system selects random elements and combines them into 6 dress designs. User gives his fitness value by selecting 2 of his favorite designs in order of favorability. The system uses a pre-defined parent selection to choose pairs of designs for divergent and recombination. After applying crossover and mutation, the results are displayed again and this loop continues until a desired design is found. As a summary, here is a pseudocode description of the algorithm:

• step 1:Generation of the first population. The GUD, GLD, upperParms and lowerParms of each individual in this population are randomly selected.

• Step 2:display: The 6 individuals are presented to the user through the user inter-face.

• Step 4: Evaluation. In response to the presented population, the user is asked to give a report based on his subjective view. This evaluation will count as the fitness function in the IGA process.

• Step 5:reproduction. According to the choice of the user, either the convergent or divergent type of reproduction is used to create a new population. Go to step 2. 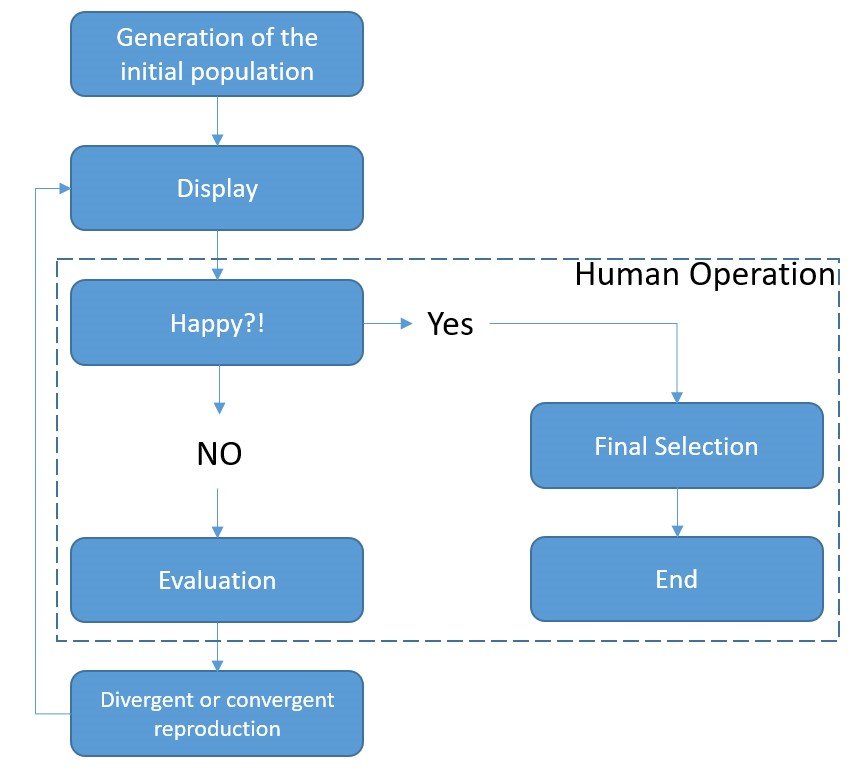